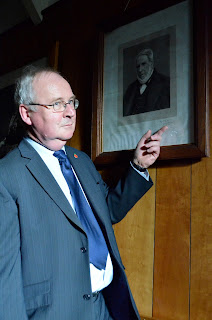 MIDDLETON-in-Teesdale’s used to be a private house; Staindrop’s is an old mill building and Bishop Auckland’s is a converted picture house.
In the area, only Barnard Castle’s Masonic Hall, in Newgate, was purpose built – the work of Joseph Kyle, at a cost of £720, of which John Bowes contributed £100.
And on Remembrance Sunday, anyone who has taken part in the parade and is interested in this largely unseen part of the town’s fabric can drop in for a cup of tea and a look round.
Both Kyle and Bowes were members of the Barnard Lodge, the oldest surviving lodge in the town, when the hall was opened in 1877.
The lodge itself was formed in 1868 and for the first nine years of its existence members met at various venues around the town.
Today, three lodges meet in the hall.
In addition to Barnard, there is the Strathmore Lodge, which was consecrated in 1946, and the Old Barnardian Lodge, formed in 1990.
The hall is something of a Tardis, with much more space than you might imagine looking from the outside.
Alan Farrar, secretary of the Strathmore Lodge, is also chairman of the premises committee which administers the building.
“It was built to suit the needs of the Barnard masons of 1877 and it continues to meet those needs quite nicely today,” he says.
In the lodge room are boards naming those who have served as masters of Strathmore and Old Barnardians.
Barnard Lodge does things differently – there are pictures of its former masters adorning the walls of the dining room, including a signed print of the aforementioned Bowes.
The lodge room is also home to the three lodge banners.
The most recent Old Barnardian banner was made by a member who has made quite a name for himself doing this sort of thing.
Mr Farrar adds: “The lodge room is where the formal business is enacted.”
But what business is that? Who are the masons?
“It is a fraternal organisation and it is an organisation that sets out to make good men better,” says Mr Farrar, adding: “We are a bit of a throwback to a bygone age.”
He says everyone has their own reason for joining.
In his case, he lost both parents by the time he was six and it was the masons who ensured he was educated.
Charitable work is done on either an individual or lodge basis.
What you won’t see, says Mr Farrar, are masons rattling collection buckets in the streets.
Lodges across the Durham province (which covers land between the Tyne and the Tees) are currently raising money for the 2021 Festival Appeal, which aims to raise tens of thousands of pounds for the Royal Masonic Trust for Girls and Boys to help with the education of masons’ dependants.
Strathmore Lodge masons expect to have raised £19,000 by 2021 as their contribution.
This will be quite an achievement, given there are not as many as there once was.
The Barnard Lodge numbers the low 20s, while both the Strathmore and Old Barnardian lodges boast about 40 members.
As with many clubs, groups and societies, it is an ageing demographic, with few younger members coming through.
Unlike Middleton’s Masonic Hall, which is used as a venue by many upper dale groups, Barney’s facilities are only really known to the lodge members who meet there monthly.
Mr Farrar reckons it’s about eight years since the hall last threw open its doors to the public.
The reason is nothing to do with secrecy or mystique which often surrounds the masons.
“This building is not licensed for public use. It is a private members club only,” he explains.
“I have had a request recently from a group asking to use the building but I had to write back to them explaining that the building is not DDA (Disability Discrimination Act) compliant.
“But we want people to come and have a look round.
“The lodge room and the dining room will be open for a cup of tea.”
For anyone interested in the town's history, it would be too good an opportunity to pass up.
Although Barnard Lodge is the oldest surviving in the town, it was not the first.
Masons can be traced back more than 250 years to the Lodge of Concord in 1760.
“It was erased in 1838 because it kept falling out with the St Cuthbert’s Militia Lodge,” says Mr Farrar.
“Those on the good side of the law went on to form the Union Lodge in 1839, which went out of use in 1861 and it was then a few of its surviving members formed the Barnard Lodge in 1868.”
To find out more about local freemasonry go online www.durhamfreemasons.org
Posted by Teesdale Mercury at 08:00:00