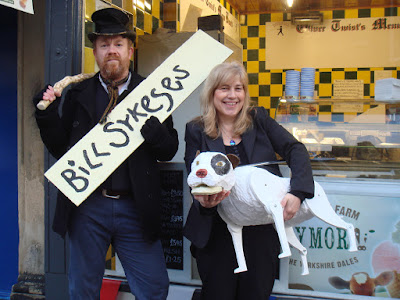 MEMBERS of the Castle Players will reconvene after the festive break to put the final touches to their winter production of Oliver Twist.

The popular theatre group will tour the play throughout January and February, beginning with a first night at The Witham, in Barnard Castle.

Director Laurence Sach has adapted the play from Dickens’ original novel and the cast began rehearsals in early October.

“Oliver was about ten to 12 years old. Ben is ten and he is perfect for the role.

“This will be the third time I have directed Ethan. He is nearly 16 and is great in the part of Dodger.”

Mr Sach said rehearsals had been going well, with just a couple of final run-throughs to go.

“We take a break and come back on January 3 for two days of rehearsal and then the dress rehearsal on the Friday night before opening on Saturday.”

He said directing the winter show threw up different challenges to those in the summer.

“In winter, you have to take into account you are taking a piece that will go into very difference performance areas.

“With Whorlton, for example, they really don’t have a stage left area which you have to take into account. You have to be very flexible.

“With the winter production, we try to keep the cast to under 15 people due to the types of venue, whereas in the summer you perform in the same place but with a much larger cast.”

Tour details for Oliver Twist are: