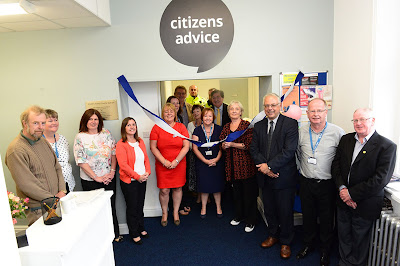 CELEBRATED children's author Anne Fine has described how she sought the help of the Citizens Advice when she was stretched financially as a young mother.

The revelation was made when the author opened the new advice office in Barnard Castle on Wednesday, June 28.

Speaking to guests, Ms Fine described how, in 1971, she, her ex-husband and six-month-old child had moved into a flat in Edinburgh only to learn about a three-year-old dispute that existed with another resident in the block.

Faced with having to pay for repairs they could not afford she got into “the worst state”, lying awake endlessly chewing on the problem.

Following a recommendation from a friend she visited the Citizens Advice Bureau where she received “sensible advice”.

She said: “I feel quite strongly about the Citizens Advice Bureau.”

Barnard Castle’s advice office, at Woodleigh, on Scar Top, is open on Mondays and Wednesdays between 10am and 4pm and anyone in need of help can simply drop in.

Office manager Helen Wightman said along with volunteers, the office has a dedicated debt expert and a home-visiting officer who can go out those who cannot get to the CAB office.

She said: “We have come a long way in the last 12 months. The staff and volunteers were absolutely outstanding in making sure the move went smoothly.”
Posted by Teesdale Mercury at 08:00:00